Technology in Sports:Improvements in decisions & results of sports

Sporting events are always dealt with excitement.The impact of technology in sports has enhanced the results of the games & are making it error-free. Here I wish to introduce & explain some of the best technologies used in various sporting events.These are the technologies that makes your favourite sport error-free. Take a Look!

As a Indian, I know a lot more than DRS(and surrounding controversies too) than any other technology in sports.Cricket is the first sport to implement a vast variety of technologies to keep decisions error-free.

The system was first introduced in India-Sri Lanka Match in 2008 & then officially launched in November 2009 during the first Test match between New Zealand and Pakistan. The system was brought to improve the quality of decisions made by umpires.The ICC first made it mandatory but then changed to optional feature following the protest from BCCI. Many players & officials have spoken in favour & against the DRS. The most problematic feature in DRS is the LBW decision system.

When LBW decision is evaluated, and if the replay demonstrates the ball has made impact more than 2.5 m away from the wickets, various criteria apply to account for the uncertainty of the ball’s direction after pitching. If the ball pitches more than 2.5 m from the wicket and travels less than 40 cm before hitting the batsman, then any not-out decision given by the on-field umpire stands.


The other technology is HawkEye. It uses multiple cameras & microphones placed around the crease & on the stumps to record the batsman’s postion & any sounds of the ball hitting the stumps. Then comes Hotspot & Snicko. Hotspot actually evaluates ball’s trajectory & shows a White spot on the bat where the ball has touched. Useful in Caught behind Edges. Snicko works in rhythm with Hotspot & records the sound of the ball touching the bat.

GoalRef is a technology used in football to accurately know when the ball touched the goal-line. It is one of the two technologies used in deciding if a Goal was actually scored.

When there’s a big fight going in the Penalty area for grabbing the ball, the referee can’t see the ball & then cannot effectively decide the fate of a goal.Unlike Cricket, football doesn’t offer a Third Umpire decision or reversing the referee’s call. hence it’s very essential to know what actually happens.

GoalRef was actually developed by a German research institute Fraunhofer in association with Select Sport.It works by detecting the passage of the ball using magnetic induction.

Along with Hawk-Eye, GoalControl and Cairos it is one of four systems approved for use in the professional game by the International Football Association Board (IFAB). GoalRef was first used in a match on 6 December 2012 in the first match of the 2012 FIFA Club World Cup.

In the GoalRef system the referee wears a wrist watch to which decisions will be sent to him. The technology relies on the principle of electromagnetic induction. A low frequency magnetic field is generated around the goal, which is monitored by coils installed in the goal posts and crossbar.

The ball is fitted with a passive electronic circuit embedded between the leather outer and inflatable inner layers. Software monitors the condition of the magnetic field in the goal and can detect the change that occurs in it due to the passage of the coils in the ball over the line. Once detected, the system sends an encrypted radio signal in real time to a wrist watch worn by the referee, which both vibrates and displays a message that a goal was scored.

HawkEye is used in Cricket & Football to review decisions.For cricket, it decides: If the ball touched the bat, Is the batsman out of the crease(in case of stumping & run outs) , the bowler is stepping after the crease for a No-ball and if the close-in fielders(wicketkeeper, slips etc) have caught the ball without touching the ground.

The system being developed by the UK company Hawk-Eye, would give a definitive decision on whether the ball had crossed the line. The Hawk Eye uses a camera taking 600 frames a second on the goal-line, with the information is analyzed by computer and sent to the referee’s headset or a device on his wrist.

In 2015, Hawkeye technology was also used by rugby officials at the 2015 Rugby World Cup, to improve decision-making by the television match official (TMO) and also assist with player safety. In this case it is enhanced video review, rather than the ball tracking technology as used in other sports. 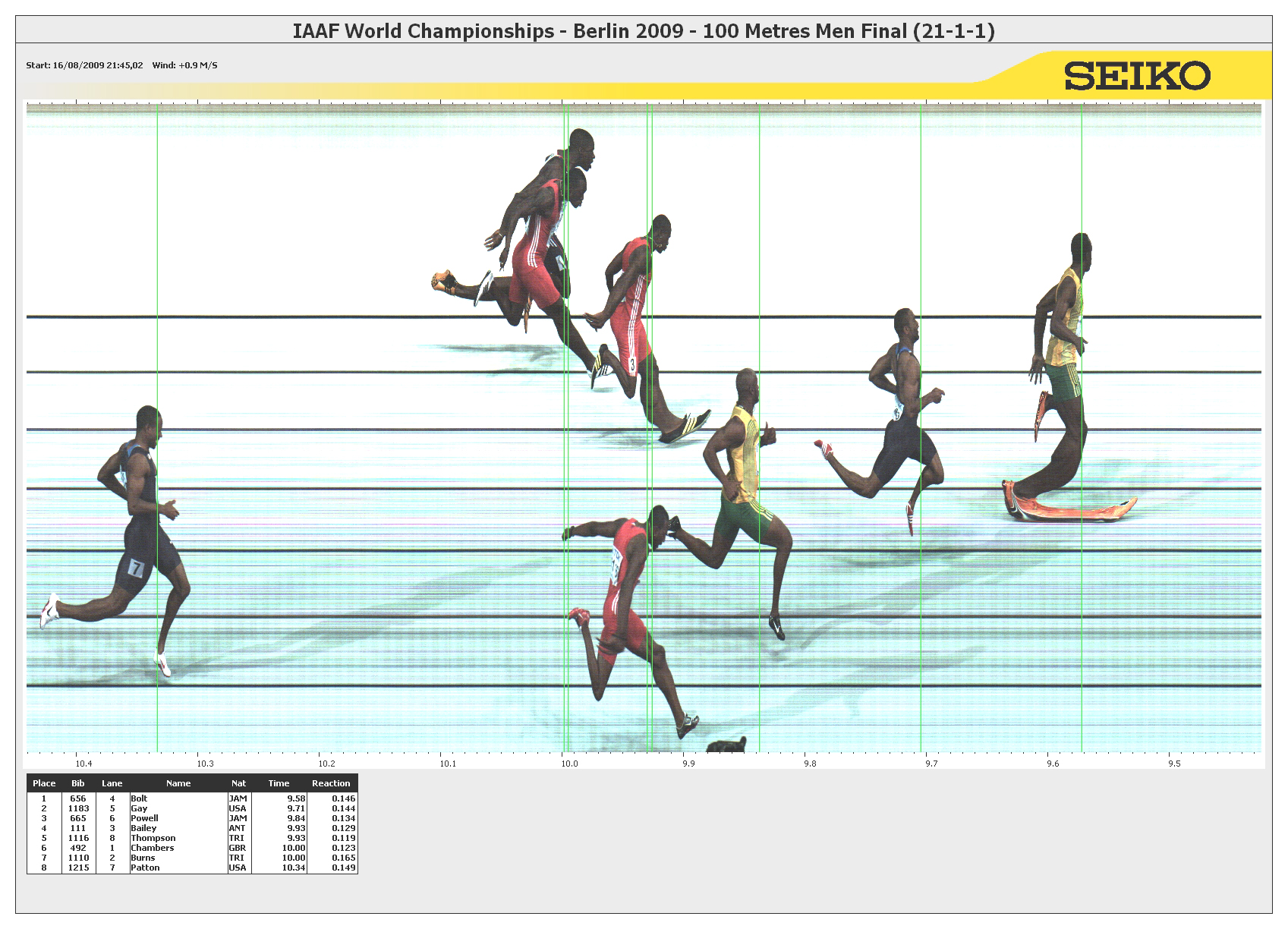 Photo finish is the technology used in Athletics, Track & Field events.When two or more athletes cross the finish line, a dispute arises over the winner. Photo finish analyses the footage & decides who crosses first within fractions of a second.

Finish line photos are still used in nearly every modern racing sport. Although some sports use electronic equipment to track the racers during a race, a photo is considered the most important evidence in selecting the winner. They are especially important during close races, but they are also used to assign official times to each competitor during any race.

A battery of electronic devices are installed in high-profile events (such as the Olympic Games) to ensure that accurate timings are given swiftly both to the spectators and to the officials. The photo finish has been used in the Olympics since as early as 1912, when the Stockholm Olympics used a camera system in the men’s 1500 metres race.

Photo finish equipments use a 1-dimensional array sensor to take 1-pixel-wide sequential images of the finish line. Since only a single line of the CCD is read out at a time, the frame rates can be very high (up to 10,000 fps).

Unlike a film based photo finish, there is no delay from developing the film, and the photo finish is available immediately. They may be triggered by a laser or photovoltaic means.

That’s all guys. Hope you enjoyed reading this piece of information. Feel free to tell what’s on your mind. Post your thoughts about this in the comments.